It’s Going to be OK

Dickens was talking about the time of the French Revolution of course, but as I sit here in my back yard on a Thursday afternoon, I can’t help thinking that yep, here we are almost halfway through the best and also worst, summer in recent memory. The best of summers, the worst of summers. It’s a sad little bit of irony in a terrible mess of a year.

One spectacular hot day right after the other is what we have feasted on in 2020. The kind of days that scream out for crowded beaches and packed pools and sold out rock concerts under starry, humid skies. Instead, most of us are still hunkered down, limiting our public appearances and waving at our neighbors from the front lawn. Thank god we have the dog.

The whole thing, really, is a delicate balance between caution and progress. As we enter stage three of re opening, governments must remind people to continue to follow the rules. That can be a tough sell, especially in a place like this, where hardly anyone got sick, and hardly anybody IS sick. All may seem serene, but don’t be fooled. A quick look at places where people have scoffed it off (a notable example being the country right next door), proves quite nicely that Covid is alive and well, and just waiting to have another go at all of us. We are not out of the woods yet. Not nearly. 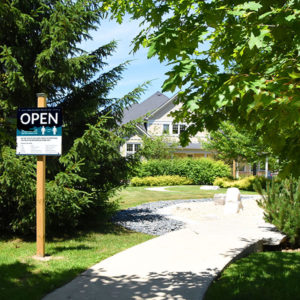 It can be especially hard in a place like Stonebridge, where social activity is the order of the day. In a normal year, we would have already had more than a dozen events down at our Beach House, and we’d be looking forward to our Annual Garage Sale and Street Dance, both of which draw hundreds of participants. We’d be “deck surfing” through the ‘hood on weeknights, glass of wine in hand as we make the rounds, and preparing mightily for our September Blues Festival.
Another thing we’d be doing is buying plane tickets, booking our condos and shopping for health insurance, as probably a third of us follow the sun during the winter, migrating to Florida and Mexico and even Barbados, where we magically re congeal into Stonebridge neighborhoods again. A travelling circus, if you like.

This year though, no one is saying very much or doing a lot of planning. Despite the fact that it LOOKS like Covid is on the ropes in these parts, she’s not, and thankfully we all understand that. The ice is MUCH too thin just yet. We may all be buying snow shovels instead of shorts this winter.

All that said though, we each also have a responsibility to dip our toe into the waters of Stage 3. There are a few people who are mightily afraid. I’m sympathetic, but I also believe that a person can follow the rules just the same whether they are afraid or not. One of the VERY worst things that could possibly happen would be that fear somehow gets us stuck in some Stage two-and-a-half purgatory from which we can never emerge.

If we are going to have a new normal, we want it to be better. Not worse.
Follow the rules. Look after each other. It is going to be OK.